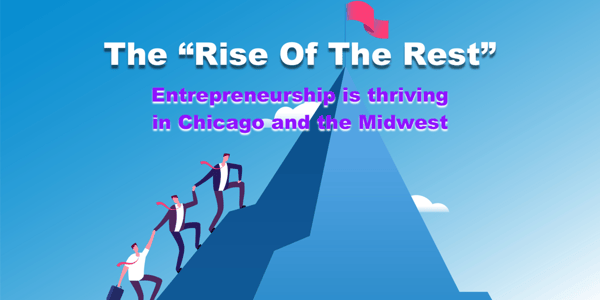 Only a few years ago, most people couldn’t imagine a successful startup anywhere but Silicon Valley. That’s since changed.

Besides the East and West coasts, Chicago and other parts of the Midwest are popular places to settle for technology entrepreneurs and innovators alike due to the lower cost of living and the large pool of highly skilled sales, marketing, operations, and engineering talent in the area. From Austin to Salt Lake to Nashville to Raleigh, there are now a plethora of cities where some of the best new thinking is thriving. In fact, within the top 10 leading hubs for startups, Chicago accounts for some of the biggest relative gains over time. Given these and other factors, it's no surprise that Chicago made it on Business.org’s 2018 top 40 startup cities list.

The “Rise of the Rest”

One of the metrics used to determine the best cities for entrepreneurship is income vs. rent. It’s important to factor this in given the generational wealth created by Silicon Valley companies – like Oracle, Apple, Google, and Facebook – which has led to high prices for everything from people to popsicles inside and outside the startup world.  The valley has become so expensive that it is becoming increasingly difficult for many entrepreneurs to survive the three to five-year grind customarily required to turn a budding idea into a viable business. This reality makes lesser-appreciated innovation hubs such as Chicago, Indianapolis, St. Louis, or Columbus great places to come to start a business.

Of the promise of the entrepreneurial life in areas outside the valley AOL co-founder Steve Case has said, “the goal is to level the playing field so everybody, everywhere who has an idea has a shot at building a company and the American Dream.” As long as wealth and venture capital are in surplus in Silicon Valley, it is sure to remain a hotbed for disruptive new ventures, but there are plenty of other places with the capital, infrastructure, and talent required to launch and scale a company. 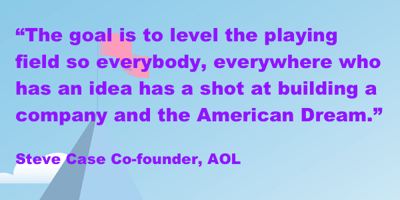 In addition to being an affordable place to live and raise a family, another primary reason startups are looking outside the traditionally tech-focused areas and flocking to Chicago is because Illinois sees greater investor returns and lower company operating costs than the rest of the nation. This trend began in 2014 and shows no signs of changing.

Chicago ranks at the top of the list for venture returns from 2013 to 2018. The median multiple on invested capital, or "MOIC"for Chicago deals is 5.6x over that period (versus 4.2x for the Bay area and 4.4x for New York). That's a huge difference for investors, and because Chicago firms typically raise less capital than their coastal counterparts, the entrepreneurs who start them in the first place.

New venture formation and funding has been rising steadily in Chicago and other Midwest cities for years but is nowhere close to reaching a saturation point. Last year, one of the best on record for Chicago, still saw only a fraction of the deals or total funding of the nation's coastal cities. However, but tangible progress is visible.

Tech companies and startups are also moving to Chicago because the city nurtures innovation hubs in different neighborhoods, building communities within communities rather than corralling tech firms into a dedicated district. Chicago is unique in that the city itself actively works to strengthen a company-community partnership. For example, ChicagoNEXT, a program of World Business Chicago, is an initiative lead by Mark Tebbe, which seeks to promote Chicago's technology industry to the rest of the nation and the world beyond . The goals of the ChicagoNEXT strategy are threefold: 1) Attract more tech companies, workers, and venture capital, 2) Improve the city's own IT infrastructure and STEM education initiatives, and 3) Nurture an ecosystem that supports talent and encourages it to stay, instead of being recruited elsewhere.

The city's leadership isn't alone in its ambitions to see Chicago become an example of how to support entrepreneurship. In late 2018, Plan 2033 (P33 for short), an ambitious effort led by former Commerce Secretary Penny Pritzker, software entrepreneur, Chris Gladwin, and former General Counsel of the U.S. Department of Commerce Kelly Welsh, made headlines. P33 is confronting the oft-asked questions: why does the nation's third-largest city lag when it comes to the number of startups and the funding they receive, and how do we change that?

Another hugely influential organization, the Illinois Technology Association, lead by Julia Kanouse, has been helping growth stage technology companies by offering access to resources, assistance with talent development, and driving visibility for the tech community since the early 2000s.

In addition to numerous organizations actively engaged in making Chicago a hotbed for innovation and new business like those highlighted above, Chicago is also benefiting from the influx of huge companies that continue to move into the neighborhood. Google, Salesforce, Microsoft, LinkedIn, and many other large technology companies continue to add resources here. Keep the talent coming. We'll take all we can get!

I would be remiss if I didn’t showcase a few of the incredible entrepreneurs who are thriving in the Windy City.

Three seasoned Chicago entrepreneurs founded Kin Insurance in 2016: Sean Harper, founder of FeeFighters, a payments startup that sold to Groupon in 2012; Lucas Ward, previously CTO and co-founder at Rippleshot; and Sebastian Villarreal, who previously founded LendSquare, which was bought by Avant in 2015. These folks are on a tear, building a business that makes it easier to purchase home insurance using data from sources that can better assess risk and cut the process down to a few mouse clicks.

Speaking of insurance, Snapsheet, a platform designed to re-imagine and deliver a customer-first insurance claims process has grown to more than 400 employees and is one of the fastest growing companies in Chicago. Brad Weisberg founded the company in 2010, after trying to deal with repair estimates he'd received from different body shops after he was involved in a fender bender.

Matt Martorello and Stephanie Klein, the founders of Braviant Holdings are the CEOs of a Chicago-based FinTech company that uses advanced analytics and proprietary technology to make smarter lending decisions. Since 2016, the staff has almost tripled, and it plans to continue this trend moving forward.

OppLoans, founded by Todd Schwartz, and lead by executives like CEO Jared Kaplan and CTO Andy Pruitt, is one of the highest-rated online lenders and service providers in its industry. Since its founding in 2012, the company has grown to nearly 350 employees, been ranked on the Inc. 500 list for three consecutive years, and was named the 6th best place to work nationally by Glassdoor.

Then there are companies like Clearcover, Dabble, Fixer, Fooda, fourkites,
G2Crowd, Hireology, Ocient, Packback, Parkwhiz, PedalCell, Nucurrent, Redshelf, Regroup Therapy, Shipbob, Truss, and YCharts, each at different and exciting stages of their development as market-leading companies in their respective verticals.

And, if that isn’t enough, Chicago also has one of the highest percentages of female entrepreneurs in the country at 30%, which is well above the global average of 18%. Chicago is home to some amazingly talented, powerful, and disruptive women, including:

Next time someone tells you that Silicon Valley is the place to go, shake your hand and point them toward the Windy City.