Lessons in Knowing Your Client from the First Great American Showman

I recently had the opportunity to play the role of Phineas Taylor Barnum in a production of the eponymous musical, "Barnum." It is a whimsical production, showcasing many of the personal and professional ups and downs PT experienced throughout his life. I got to sing, dance, juggle, walk a tightrope, crack a few corny jokes here and there, and work with some amazingly talented people. It was a remarkable experience. 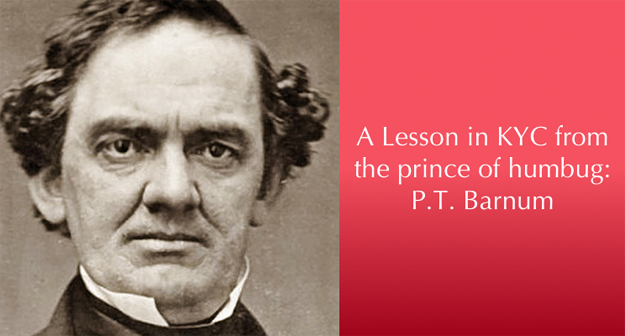 Getting to know the 'real' PT Barnum was an important part of my preparation for the show. Lucky for me, one of Barnum's most successful methods of self-promotion was the mass publication of his autobiography, "Struggles and Triumphs: Forty Years' Recollections of PT Barnum" and other books, so I didn't have too much trouble finding a well-preserved original print from1873 to comb through. Studying his books helped me prepare for the role and get a closer look at the experiences of this colorful figure and develop a better understanding of who he was as a person.

Regardless of what you may have come to believe about him based on Hugh Jackman's surprise smash hit late last year, Barnum’s career was controversial. Barnum trafficked in curiosities, which he served up to a hungry public regardless of how accurate they were. He, more than anyone up to that point in American history, understood that putting on glittering appearances that could arrest attention and engage the public was a sure-fire way to make lots of money. Barnum relentlessly justified his flimflam and humbug, declaring no harm, no foul, so long as at the end of the day his customers felt like they got their money’s worth out of his attractions. PT always referred to himself as an entertainer first and foremost and claimed to have been most content when bringing happiness to others and making a buck for himself. Love him or hate him, as I read and re-read his books, I kept coming back to one often overlooked skill that Barnum leveraged through the entirety of his career that directly contributed to his success: his gift for knowing his audience and his customer.

Regardless of the endeavor, Barnum always made a point of getting to know everything he could about his audience, customers, and would-be business partners well in advance of meeting them for the first time. Whether in preparation for his partnership with Amos Scudder to build Barnum's American Museum in New York City, or signing the Swedish opera singer, Jenny Lind, to her legendary US concert tour before hearing her sing a single note, PT always employed the same basic strategy to get to know as much as he could about the people with whom he wished to work before engaging them.

First, he would meticulously plan out his proposed endeavor, always taking care to attach his vision to the mood of his target market.

Then, once he was sure he was speaking the same language as his buyers, he would search for the ideal partners to help him get in front of the market effectively.

Next, he would leverage his existing network to learn everything he could about his prospective partners, their habits, mannerisms, and dislikes.

Only after careful evaluation of those people would he actually seek an audience or introduction. And, once he was in, he would sell his vision and seal the deal.

Barnum never made the same proposal to any two people. By getting to know as much about his prospects as possible before engaging them, Barnum was more effective in tailoring his message and proposing ventures that would appeal to their needs and wants. Even if the business terms were identical, the pitch was always customized to his audience and designed to appeal to their values or their vanity.

Barnum's efforts generally paid off, helping him to manage the expectations of his partners and patrons while maximizing his own gain - be it in the form of publicity or profit. Below is one of many memorable examples from Barnum's life that illustrates how he learned about people and then leveraged relationships to accomplish his goals.

The Shirt On Your Back

Barnum was fond of telling a story from his early days in business about a man by the last name of Darrow who was a noted joker in the Bridgeport, Connecticut bar scene. He was well-known to the locals for manipulating unsuspecting visitors into making large wagers which he could not lose. According to Barnum's autobiography, Darrow's most successful wager was a gimmick based on a simpleton supposition: "I'll bet you haven't got a whole shirt on your back." The catch in Darrow's scheme consists in the fact that, no more than one half of a shirt actually covers the wearer's back!  Barnum, who frequently traveled to Bridgeport from Danbury on business heard about Mr. Darrow's trickery from a mutual acquaintance and hatched a plan to catch the joker in his own snares, earn himself a princely wage for the act, and raise his public profile with the locals at the same time.

Before slipping into the bar one evening, Phineas cleverly clipped a freshly pressed shirt to his back using his suspenders and covered it up by donning his vest and overcoat. Once inside the tavern, it didn't take long to engage Mr. Darrow in a conversation and gradually lure him into making his infamous wager. According to Barnum, by playing dumb, he managed to get Darrow riled up enough to make a larger-than-normal bet with him. Said Darrow while handing his money over to the barkeep, "Here's five dollars (~$130 in 2018 dollars). Remember, I bet you ain't got a whole shirt on your back!"

Barnum quickly produced five dollars, handed it to the barkeep, and slowly proceeded to take off his coat and unbutton his vest. According to his telling of the story, every local in the bar assumed he had been caught in the snare and began laughing heartily. Old Darrow himself purportedly danced with delight and went running up to Barnum, slapped his hands together, and exclaimed, "you needn't take off any more clothes, for if your shirt ain't all on your back, you've lost!"

"If it is, I suppose you have!" replied Barnum, as he reached over his shoulder and pulled the neatly folded whole-shirt off his back with a smile and a nod to the suddenly silent crowd. In Barnum's words, "such a shriek of laughter as burst forth from the crowd I scarcely ever heard, and certainly such a blank countenance as old Darrow exhibited it would be hard to conceive."

Having accomplished two of his three goals for the evening, and never one to waste an opportunity to promote himself or his business interests, Barnum pounced on the chance to raise his personal stock in the minds of all present. No sooner had he won the bet than he revealed how he'd done it by acknowledging his friend's help in the plot and reconciled with Darrow.  PT then used most of his winnings to buy everyone in the bar, including Darrow, a drink! He wrote, "All hands went up to the bar and drank with a hearty good will, for it was seldom that Darrow got taken in, and he was such an inveterate joker they liked to see him paid in his own coin. Never till the day of his death did he hear the last of the whole shirt."  And, never to this day has Barnum's name not been known in the city of Bridgeport, Connecticut and beyond.

In today's modern business world we have access to more tech-based tools and tricks than ever before to get to know our prospects and customers. Many of them, including some of the tools my company makes, help us to get in front of people more quickly and are designed to help shorten sales cycles and get to "yes" faster than ever. However, as helpful as technology is, there will never be a substitute for fostering personal connections and good old-fashioned relationship building. Using the two together is more important than ever!

We all inherently understand that establishing meaningful relationships takes time and consistent investment, but sometimes we forget and focus too much on the here and now. Companies and individuals who make a habit of only striving for immediate gains or chasing one-off wins without bothering to make a connection with their customers have a tough time succeeding over the long-term.

Just as in Barnum's day, it takes a long time to forge deep relationships with business partners and customers. Being strategic and putting in a bit of time every day to cultivate your relationships is a sure-fire path to success in the end. May we all remember this truism and PT's "shirt on your back" story every time we need a little extra motivation to make a call or send an email to a client or friend to keep the connection strong!