Being Extreme: Parallels Between Endurance Sports and Business

I can admit that, upon first glance, my career and my hobbies seem to be vastly different. I work in FinTech, building software for the asset management industry, located in one of the country's biggest financial hubs, spending most of my days in offices, sitting at a computer or in meetings. But outside of work, I participate in endurance athletics, heading as far into nature as possible to find ways to push my body and mind to their limits for many hours at a time. If I sit at all out there, it's because I'm on a bike.

Over time, I've noticed more overlap between these two spheres of my life than I ever thought I would. I wanted to write this post to highlight that overlap, and also to provide a window into endurance athletics for those of you who are unfamiliar.

First, let's define an endurance sport: generally speaking, it is anything that constitutes prolonged exertion of your aerobic — not necessarily anaerobic — system. From my perspective, anything over three or four hours in duration qualifies. Typical endurance activities for me include running more than a marathon, biking more than 75 miles, adventure racing for 4+ hours, or stringing together several activities like swimming, biking, climbing, or running for many hours at a time. Events like a Half Ironman (1.2-mile swim, 56-mile bike ride, 13.1-mile run), an ultramarathon, or something similar are recipes for a fabulous time! An endurance athlete is also someone who is consistently committed to these sports, rather than participating in a marathon or triathlon as a one-off.

As you can imagine, most people don't grow up with this hobby, and my path to endurance athletics has been a circuitous one. I grew up in Colorado in a super active family. Like many families, my siblings and I played nearly every sport imaginable (several of them went on to be Division I athletes in college). Aside from playing the usual sports like baseball, basketball, soccer, and football, I also loved going camping, hiking and even adventuring without supplies from time to time.

My shot at serious athletics evaporated in high school due to a rare joint disorder that resulted in avascular necrosis in my left knee. After surgery, I had to take several years off of running to heal. As a result of my condition, by my early twenties, severe arthritis developed in both of my knees, bringing pain and stiffness with every step walked and stair climbed ever since. Running was off the table, so I switched to lifting weights and riding my bike as often as I could manage.

After I finished school, spent a few years working on Wall Street, got married, became a dad, and co-founded my first software company, my exercise program became limited to daily donut curls. As a result, one day in 2003, I woke up 50 pounds overweight and realized that if I didn't get back into shape, my crappy knees would be the least of my physical challenges.

Running, biking, and lifting weights still hurt like hell, but once it was clear-ish that I probably wouldn’t be doing any greater damage to myself, I went all in. My knees still ache every hour of every day, but the benefits I get from exercise and careful training are worth it. Plus, I figure in the next decade or two I’ll be able to install a set of sweet cybernetic replacements, so my original equipment doesn’t have to last that much longer!

Anyway, within nine months of deciding to get healthy, I dropped from 240 to 175 pounds and was running sub-6-minute miles in 10K races. 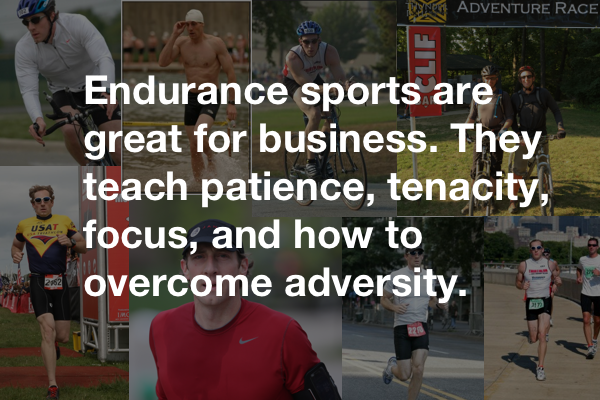 After getting back into shape, I started competing aggressively in triathlons. That led to running a bunch of marathons and ultramarathons. Most of the ultras I've done have been out west (Utah, Colorado, Arizona, California), although I've also run ultras in Illinois and upstate New York. I should pause for a moment and state, for the record, that I don't do the "crazy" (relative term, I know) ultra runs of 85 to 100+ miles. Those are bonkers! The longest ultramarathon I've done was 67 blissful miles, but I have several friends in the industry who are far more extreme than I am.

Take Ivan Zinn of Atalaya, for example. He runs 100 miles races. He's nuts. Ivan runs a successful asset management firm by day and runs around like a crazy person at other times. He once ran in the Western States 100 Mile Endurance Run — the granddaddy of ultramarathons — and pulled off an epic finish in under 24 hours. There's even a movie about his epic journey to finish.

Alec Litowitz, CEO of Magnetar Capital, is another high-profile example. A former All-American collegiate squash player, his official company bio showcases his passion for endurance and adventure races, such as the Perskindol Swiss Epic, “a six-day mountain bike stage race with 500 riders.”

I have another friend who is in his mid-40s and is the COO of a sizeable secretive hedge fund (his boss won’t let him share his name). He runs several marathons a month, and what makes him amazing is that he's putting up faster times now than he did in his 20s and 30s. Nuts!

Yet another friend with a secretive boss is a Managing Director at a multi-billion dollar family office where he runs a venture capital book. He regularly knocks out 60-to-100-mile 'fun' runs over hills and dales in sunny California to unwind and forget about the stress of the markets.

These are just four examples of many I know in the asset management industry. This trend begs the question: is this anything more than a coincidence? In some sense, it is part of a larger trend of people in general embracing endurance athletics. I've noticed it more and more over the past decade and change, and the numbers back it up.

For example, there was a massive growth wave of participation in Sprint and Olympic distance triathlon in the mid-2000s. Data from Statista suggests that overall participation in the sport in the US was below one million in 2006, but that grew to more than four million by 2017.

There aren’t nearly as many people crazy enough to run ultramarathons, but the numbers are growing. The folks behind the Ultra Sports Science Foundation published research that suggests that the nearly 50,000 people completed an ultramarathon in the united states in 2016 (the number was closer to 300,000 worldwide).

Whether it is to complete an endurance event or not, most human beings periodically feel compelled to get outside and run around. We evolved as endurance athletes, learning how to hunt and gather food across large stretches of land. Endurance athletics provide a compelling way for the people of the world's first indoor generation, who face the prospect of spending 90% of their lives inside, to reconnect with the natural world and themselves. In fact, as highlighted in thought-provoking books like Nature Fix, the more urban we become, the more we get this craving to get outside and reconnect with nature for our mental well-being. If nothing else, endurance sports definitely require you to get out in nature! Sure, you can run around the Chicago Loop, Central Park, or Hyde Park a zillion times and rack up 50-miles, but it's logistically challenging — and not very much fun — to do an ultramarathon in a big city.

In the asset management industry, whether we're managing money or making the tools managers use to manage that money, we're generally sitting behind a desk in an office building in a major city. We are prime candidates for a sport that takes us away from spreadsheets, stock charts, and donuts.

Add to that the fact that the asset management industry is filled with hyper-competitive people who get a kick out of pushing themselves, and it's no wonder so many men and women are drawn to endurance sports. Fund managers are focused on achievement and growth and personal development. It's not a surprise, then, that these people want to push themselves outside of the workplace as well.

I also think there is a bit of a Maslow's “hierarchy of needs” thing at play here. People working in asset management typically have their basic needs met and can more readily focus on connecting with themselves on a deeper physical, spiritual, and emotional level. Some of the deepest, brutally honest, and most introspective conversations I’ve had with myself have taken place somewhere between mile 35 and 50 of a run. You get to know quite a bit about yourself and your ability to persevere when you’re running through the desert by yourself and run out of water many miles away from an aid station.

Endurance athletics has helped me greatly in my career as an entrepreneur, and I'm not just talking about the friends I've made and business I’ve done as a result of a shared interest in these activities. Endurance sports have helped reshape my mindset for a job that requires stress management and, well, a hell of a lot of endurance.

In business, as in an ultramarathon or 100+ mile bike ride, the key to making it to the finish line is formulating a game plan while acknowledging that external factors, like a sprained ankle or a failed product release, could derail you at any moment. When adversity strikes — and it always does — you need to be able to revise your plan in real-time and keep pushing forward. Both business and endurance athletics are all about relentless forward progress (there’s a great book with this title, by the way).

Though it may seem counterintuitive, completing a long-distance event is more mental than physical. I’m being serious. Obviously, running 50 miles is physically challenging for any human being, no matter what shape they're in. But, once you get to a certain point, endurance athletics becomes a mental game.

One thought that keeps me going when I'm four to six hours into an activity and wondering why in the world I’ve chosen to beat myself up is that I don't have to make it all the way to the finish line.  I just need to go halfway and then one step more.

This line of thinking motivates me by helping me remember that if I can make it halfway plus one more step, it will be easier to just push forward to the finish line than to turn around and retreat to the starting line.

Business is the same way. You have to be patient and willing to accept that no matter how prepared you are at the starting line, you cannot predict what will happen along the way. The good news is that, wherever the endpoint is, you needn't fret about getting there straight away. When you focus on making it halfway plus one step more, you’re better able to visualize the finish line, adjust to changing conditions, and find the strength to persevere. This philosophy has carried me through many difficult situations in my career.

Endurance athletics aren't everyone's cup of tea, but I'm very grateful that I found them. If you have an interest in giving them a shot — whether you're in the asset management industry or not — I'd be more than happy to show you the ropes.